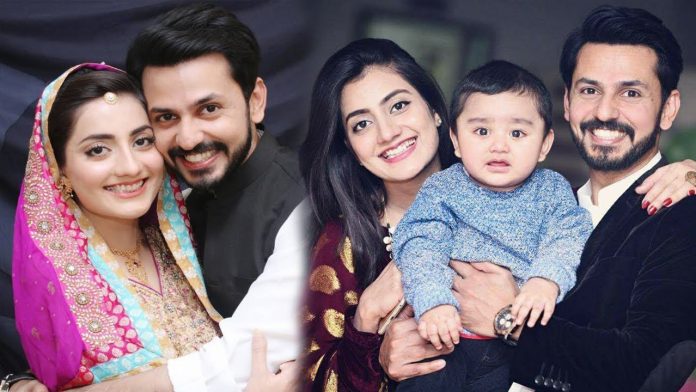 Uroosa Bilal Qureshi Biography: Uroosa Qureshi is a Pakistani model and actress. She is one of the most popular actresses of Pakistan. She is a very beautiful and gorgeous looking actress. One of the talented actresses of showbiz is Uroosa. Uroosa has a lot of fan following and hence her fan followers are all over the world. Uroosa Bilal Qureshi has started his career a few years ago but by his gorgeous look and amazing talent, she has gained a lot of popularity. She has played roles in many dramas and soaps. She has performed many different characters with great efficiency.

Uroosa Qureshi is a married actress. Uroosa got married to Bilal Qureshi. They have a cute and innocent son. Their son’s name is Muhammad Sohan Qureshi. They both loved him. Uroosa filled the case of domestic violence on Bilal but after that she reclaims it and now the couple is living a successful and happy life. They both loved each other and spending a very wonderful time with each other.

Uroosa Qureshi was born on 2nd January 1990. Now her age is 30 years. She is one of the youngest actresses. She has joined the showbiz industry at a very early age.

Uroosa Qureshi was at Karachi. Most actresses of Pakistan have common birthplace i.e. Karachi. Karachi is one of the largest cities in Pakistan.

Uroosa Qureshi stepped in showbiz career as a model. She has worn dresses of many designers and walked on-ramps for many designers. She has also done many T.V commercials. As a result, Uroosa gained a lot of popularity. After gaining experience and reputation there she stepped up in acting. She has played many side roles. Also, she has played roles in many drama serials and soaps which became most popular in the showbiz industry.  She is a very talented girl and through her talent, she has gained a lot of reputation and became one of the most popular and top-rated actresses of our showbiz industry.

Uroosa has played his role and show her talent in many dramas serials like:

This drama is about family conflicts and misunderstandings. This drama highlights the issue that if there is a lack of love and understanding between peoples and families then many conflicts arise which creates a lot of problems for every member of the family. Uroosa played a role as a supporting character in it. Uroosa played for the first time in this drama serial.

Other drama serials of Uroosa Qureshi are:

Uroosa with her talent and outstanding performances in many dramas and soaps has made many achievements in the showbiz industry of Pakistan. She is one of the award achiever actresses of Pakistan. She has won the award for Best Actress of Soap in “Sartaj Mera Tu Raaj Mera “ in 4th Hum Awards.