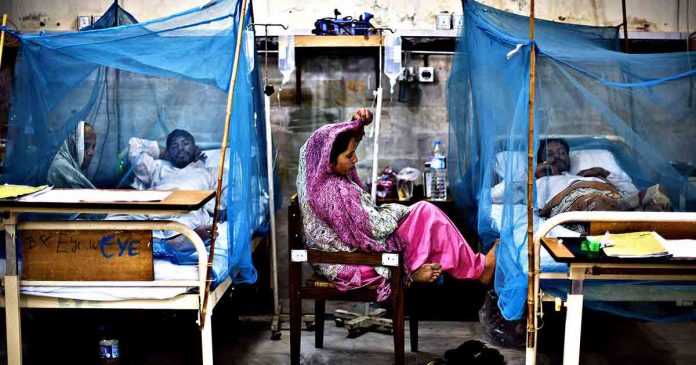 Dengue Fever in Pakistan: A wild epidemic. This is what dengue fever developed into a few years ago. People were getting sick; it was a state of chaos for the entire nation. Since then, we got to understand just how dangerous it can be. Even though the chances of complication were not extremely high, Pakistan lost many lives to the virus. The mosquito-borne tropical disease has five different types, one of those types provides lifelong immunity to it while others provide only a short-term one. Moreover, if a person was previously infected with one type of the virus, another infection with a different type increases the risk of severe complications.

According to healthcare experts at emeds Pharmacy, it is better to take preventive steps, especially in the monsoon weather to avoid this disease.

The fever symptoms appear between 1-2 weeks of infection and may generally include vomiting, high fever, headache, joint and muscle pain, and a characteristic skin rash. Mild cases usually subside in about 2-7 days, but some cases can develop into severe fevers leading to further complications, indicated by many serious symptoms.

There are a few factors that increase the risk of people contracting the infection or even developing a severe version of it:

People with dengue fever virus often appear to be asymptomatic or show mild symptoms. That mild severity can lead to people downplaying their symptoms and being diagnosed with another mild viral infection such as flu. Children usually have mild cases with symptoms of the common cold, vomiting, diarrhea compared to older people but have relatively higher chances of developing the severe version of the disease.

Severe cases of dengue fever can include symptoms such as bleeding from the gums, liver enlargement, a very high fever. The symptoms of the virus are listed below in detail with their respective severities:

These symptoms usually disappear after the first week.

The symptoms of dengue hemorrhagic fever gradually develop from mild intensity; they worsen within a few days. If not treated promptly, it can be fatal. People with this fever may experience:

This is a severe form of dengue and can be fatal. Along with mild symptoms, a person suffering from dengue shock syndrome can experience:

With the severe form of dengue fever, the body losses a large number of platelets – the clot-forming, blood-thickening cells – due to which the bleeding becomes profound. This can also lead to internal bleeding, shock, and even organ failure. The warning signs of developing these severe forms can begin to show around a couple of days after the fever subsides and can develop quickly.

These symptoms of severe dengue fever pose a life-threatening health emergency, and people should seek immediate medical attention with the development of the warning signs.

Provide vaccinations in areas with frequent outbreaks of dengue fever virus to people aged 9-45 with a history of at least one infection with any of the types mentioned above of the virus. The vaccine is administered in the course of three doses over a period of one year. As for the people who haven’t ever contracted the disease, the vaccine does not prevent infection and can increase the risk of developing complications in case of future infection.

Keeping in mind the information we have on the vaccine, the World Health Organization believes and stresses that the vaccine alone is not an adequate tool to diminish dengue fever in areas that experience repeated surges. The primary methods of curbing the fever still remain to be preventing exposure to mosquito bites and controlling their population.

As an individual, try following the preventive measures that can be effective: