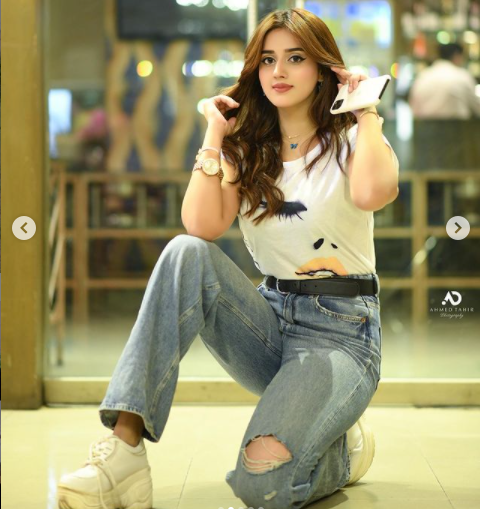 Jannat Mirza Biography: Jannat Mirza is a Pakistani social media star who became famous for her videos on TikTok. She is very popular and active on social media. Therefore Jannat has a lot of followers on Instagram and TikTok. She is beautiful, and people admire her for her sense of humor. Jannat is fashionable, and she always dresses to impress. She is a model and fashion icon. Jannat is famous for her comedy, Romantic, Poetry video clips, and lip-syncs.

At present, Jannat is the biggest sensation on Tiktok. She has more than 15 million followers on Tiktok. Her videos get millions of views in few minutes. Jannat left for Japan when Titok got banned in Pakistan. But her fans didn’t leave her and viewed her videos using a VPN. She is a Youtuber and makes vlogs.

Jannat is 23 years old. She was born on 11 August 1997 in Faisalabad. Alishba Anjum is her twin sister. She is also a TIKTOK STAR. There are several videos of them together.

She did her early schooling in Lahore grammar school. Jannat went to the Arts college for her intermediate. Now, she recently graduated from the University of Faisalabad.

She belongs to a decent family. Her father is a police officer, and her mother is a housewife.

Jannat rose to fame when her TikTok videos got viral. Her beauty and innocence captured the heart of millions of people, and they started following her. In 2019, her first short film ‘Baba Ji ki booty’ was released on the internet along with Saleem Miraj, Alishba Anjum, and Zulqarnain Sikandar.

In the same year, she announced to start her first Lollywood film under the direction of renowned Syed Noor. The shooting for the film has begun. She is going to cast talented Saima Noor and many other popular actors. She has also appeared in a music video Shayar along with Sarmad Qadeer.

Currently, Jannat Mirza is in a relationship with famous TikTok star Umer Fayyaz Butt. They both got engaged as well. The wedding date is yet to be announced.